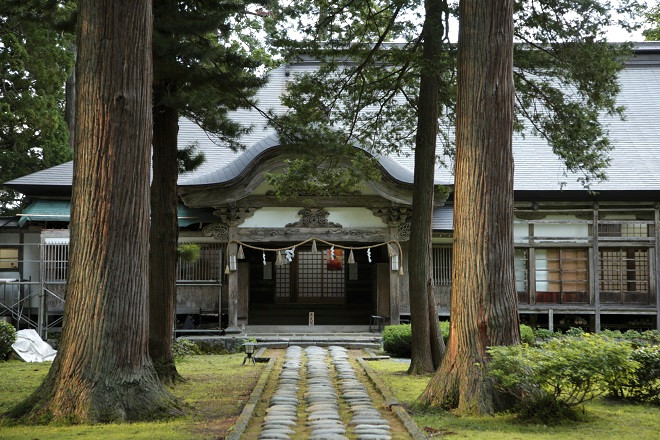 Climbing the Ichi-no-saka slope, the steepest Ni-no-saka, and then, when you are through the final San-no-saka, you will find the building of Saikan on your left, just before reaching the mountaintop. Originally the building of Kezo-in Temple, one of the three temples at which sendatsu, or guide yamabushi, stayed to purify themselves before entering Mt. Haguro, here still exists a facility for priests’ service. The entrance is from the Momoyama period (late 16th Century), and was relocated to its current location on the occasion of the separation of Shinto from Buddhism in the Meiji period (1868-1912). Currently, Saikan accommodates general visitors, offering also shojin cuisine with naturally-grown mountain vegetables and mushrooms harvested on Mt. Gassan. Each of the dishes, which were also introduced overseas to rave reviews, will let you sense the local climate of the Shonai region and the yamabushi culture of Mt. Haguro.