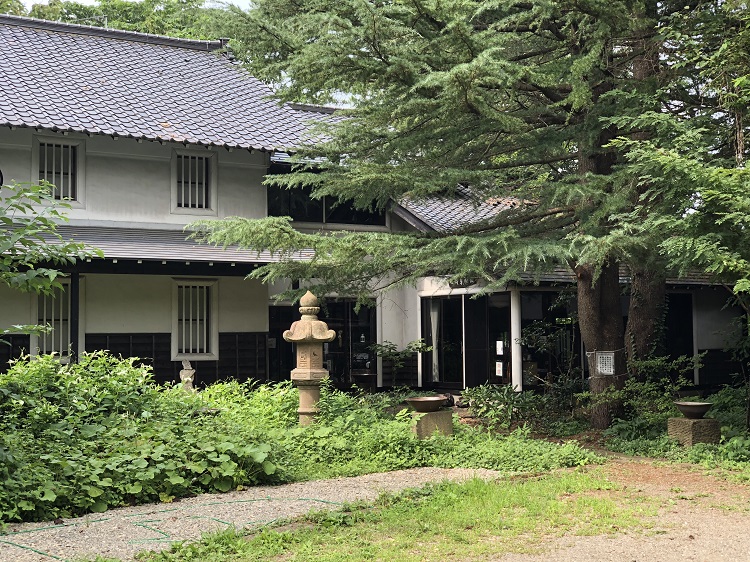 Surrounded by vast rice fields and persimmon orchards extending from the foot of sacred Mt. Gassan, Imai Art Gallery is a quiet and modest museum, whose building is a remodeling of an old white plaster-walled storehouse.
Formerly known as “Imai Shigesaburo Art Collection Museum, the gallery was originally opened in 1990 by the western painting artist Shigesaburo Imai (1910-2002) to store and exhibit his own works. The building itself was originally constructed back in 1689 (the second year of the Genroku period) by an old family in Tsuruoka as their storehouse, which was then relocated by Imai to his own residence in the hope that local cultural heritage would not disappear from the Shonai region. To take advantage of its magnificent style with a long history, the remodeling was limited to the least extent to convert it into a museum. Being temporarily closed since November 2014, it was once again pre-opened in the fall of the following year, before its official opening in the spring of 2016, as “Imai Art Gallery,” to set out on a new journey.
While he was alive, Imai thought, “art and paintings exist for the next generations,” and “I will create spaces to be shared by children and young generations.” While focusing on the permanent exhibition of Imai’s artworks, the gallery has been reopened with the first floor themed to inform visitors about various artistic activities. The former atelier, located next to the museum, was remodeled into “Atelier Izumino,” themed on a space of creation and exchanges. The garden “Haguro’s Small Woods,” populated with trees grown and planted by Imai, is themed on the experience of touching and playing with nature. The whole premises, themed as “Haguro Artistic Woods,” is open to the public as a place to “create, foster, and transmit our local art culture to future generations.” For our extended activities, the gallery, the hall, and the atelier are available for rent.