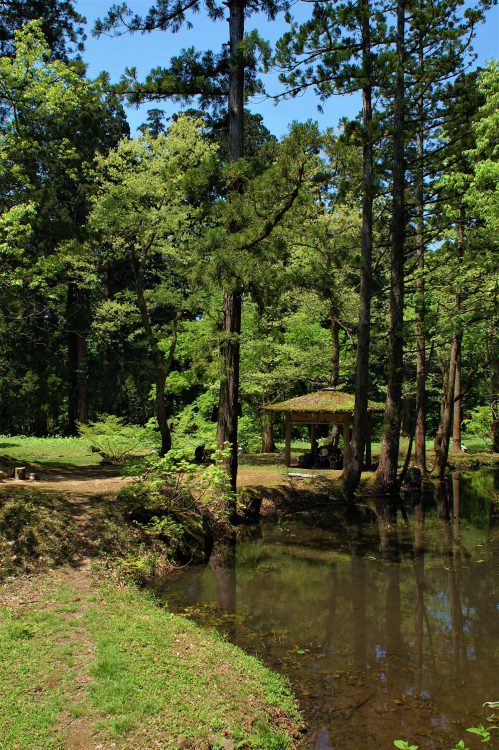 You find a trail that extends to the right at the foot of the San-no-saka slope. Walking about 400 meters on the trail will take you to the ruins of Betsuin Shion-ji Temple, commonly called “Minamidani,” in which Matsuo Basho stayed during his journey of Oku no Hosomichi. This respected haiku poet read a verse on this location: “Arigataya, Yuki o kaorasu, Minamidani” (With the snow remaining around, Minamidani reveals such a rare landscape). Named for its shape of the Chinese character for “heart,” the Shinji-ike pond (i.e. the pond shaped in the character for heart) brings you a cool breeze even in the summer, making this moss-covered area of Minamidani seem as if time has stopped. It was in the year 2000 when water was filled in this once-dried-up pond for the first time in 320 years. Young members of the nonprofit organization “Hachiko-yama Shachu” from the Haguro area took leadership in the volunteer activities to restore the sacred places of the mountain. Minamidani is now one of the hidden sightseeing spots around Mt. Haguro.